Year-round strawberry: how to stand out on the Russian agrarian market 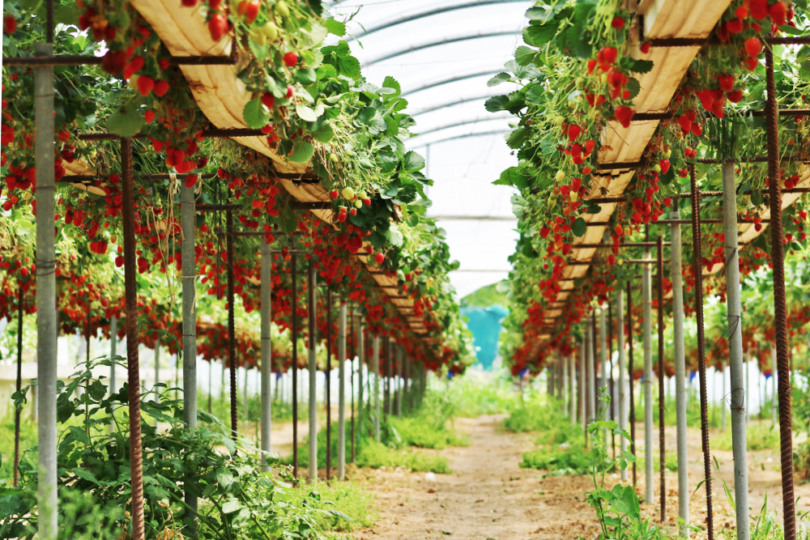 It is planned to grow berries in greenhouses. The first yield is to be harvested in March 2019. Owner: Oksana Fedoseyeva.

Oksana Fedoseyeva is the head of Vostock Capital Ltd. Her business is the organisation of international investment forums. And one of such forums suddenly involved her in the farm business. That happened in December 2016 when Greenhouse Complexes Russia Forum took place. “I thought “wow”, it’s cool. It’s not just agro, but nano business, when innovative greenhouses are used”, Oksana says. “It took me a year to assess the business. And in 2017 I had a meeting with the Governor of the Stavropol territory and Russian Minister of agriculture. I announced my plans to work on the project”. In the upcoming year the launch of her project is expected. While working on it she initiated legislative amendments in association with Sberbank and Stavropol Minagri. The legislative novelties help all producers of berries across Russia – from small farms to large companies.

Viewing the photos from that forum we notice only one woman among people sitting in front of the audience. The blonde in bright-red outfit. The produce of her new company “Stavropol Flavour” flawlessly correlates to her red attire. Oksana intends first to grow strawberry. “Initially there was an idea to grow trendy berries – blueberry, raspberry. But then I started to explore the issue and surprisingly understood that ordinary strawberry was not cultivated in greenhouses in Russia!”. Her analysis showed the country officially imported 50k tonnes of strawberry per year. We have another 50k tonnes imported from Belarus. And despite of famous strawberry fields, such as Sovkhoz imeni Lenina in Moscow suburbs, local producers occupy minor share on the market and only seasonally.

The greenhouse project provides for the construction of at least three phases. The first one comprises two blocks 3 ha each. The first one is traditional and the second is experimental. There more expensive equipment will be mounted, including greenhouse transformation systems. The useful area in a greenhouse is usually limited because it is necessary to leave space between beds for people and machinery. One of the blocks of Stavropol Flavour will feature special movable plant beds. This will help save 10% of useful area. Theoretically, it will increase the profit by 10% and will make the investment in such technology profitable. To date there are no greenhouses like this in Russia, so the efficiency can hardly be calculated.

The construction of the greenhouse complex has just commenced. It took several months before the appropriate site and dedicated specialists were found. It also took time to elaborate the final design. On 1 September installation works are expected while the commissioning is scheduled for early 2019. In March the first strawberry can be picked. It is expected to harvest 720 tonnes of strawberry by the end of the year. Next harvest will be bigger – up to 900-1000 tonnes. This covers only 1% of the market, but Oksana Fedoseyeva is sure that her berry will meet the consumer. There is a niche in Russia where a bit more expensive but high-quality berry is demanded. “The strawberry coming from abroad is of firm varieties. It better endures storage and transportation, but has nothing in common with soft and juicy berry”, Oksana says.

“One of the main risks – lack of professionals”, says Oksana answering the question about key challenges she faces. She met an expert who monitored the construction of one of the major complexes of the brand named “Belaya Dacha”. He was previously managing the greenhouses of one of the famous restaurateurs. There fresh berries were cultivated with 1-day shelf life.

We expect a 7-year project payback period. My goal is not quick return on investment but development. I want the business to grow and plan to invest in development and expansion first. We plan at least two more phases. That is why the project should be included in the concessional lending programme. Now we can spend 1bn on capital expenditure and have 200m covered by the government. But berries were not included in the programme. But we managed to settle the matter. Berries are now included in the concessional lending programme. Sberbank representatives assisted us in addressing the challenge and we are getting a loan at the preferential rate.

As any other new business, Stavropol Flavour faces unexpected challenges affecting the result. Initially, project investment was estimated at 500m RUR. But now it is already 800m. And it is just the first phase of construction. Oksana Fedoseyeva took every effort the exercise her right to get benefits: loans, return on investment. And when it came out that berries were not included in the programme, it did not stop her – quite the opposite. In association with Sberbank preferential conditions were provided for such companies.

Oksana has big plans to become a reality if the berries will not only rely on concessional lending but also on return on investment. The production site in the Stavropol territory is capable to accommodate 2 more greenhouse phases. Their construction will be cheaper because the infrastructure is ready. For example, if the government reimburses 20% of capital expenditure incurred another 6-ha phase can be built. Its commissioning is scheduled for the next summer.