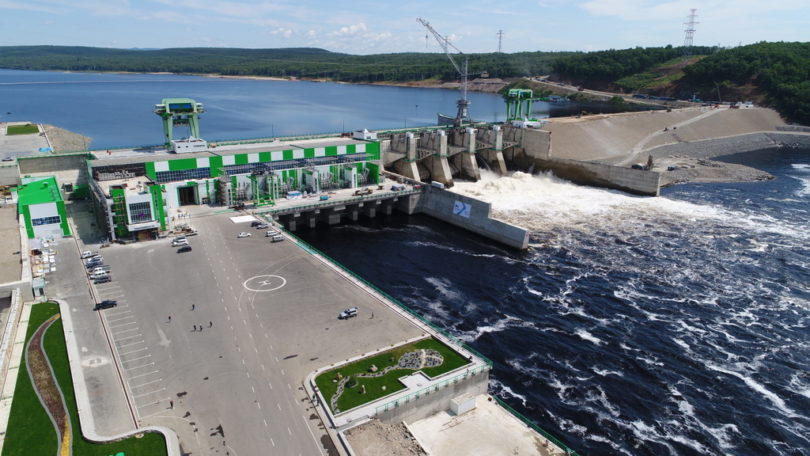 Russian hydropower producer Rushydro and compatriot module manufacturer Hevel Solar have jointly announced the launch of what is said to be Russia’s first hybrid hydro-PV project.

The two companies said that a 1.27 MW pilot solar power plant will be installed at a hydropower plant owned and operated by Rushydro in the Amur region, in the Russian Far East – the 320 MW Nizhne-Bureyskaya facility. The solar plant is intended to reduce cost of electricity for the power plant’s own needs, while unlocking additional output by the hydroelectric plant, the companies added.

When asked by pv magazine if the project may rely on a floating technology, the head of corporate communication of Hevel, Anton Usachev said that, according to the current project design, the PV plant will be mounted on the slope of the dam, but that the floating option seems to be completely excluded. “The lower slope of the soil part of the dam is oriented to the south-west, which allows the placement of solar modules taking into account the maximum solar radiation,” the two companies said in their statement

The project, Usachev went on to say, will be Russia’s first hybrid hydro-solar project, as the PV plant will be connected to the same substation of the hydropower facility and feed the same grid.

The commissioning of the project is scheduled for the end of this year. The solar plant will rely on heterojunction modules of 370 W provided by Hevel.

Rushydro announced a plan to expand the use of solar energy across its service territory in June 2017. At the time, the company said it wanted to deploy off-grid medium-sized PV plants across remote areas of Yacutia, a region in Russia’s Far Eastern Federal District. The company’s unit PJSC RAO ES East, which operates in isolated areas of the Far East of Russia, is also targeting the installation of 146 MW of renewable energy generation capacity. At that time, Hevel Solar also announced it intended to build off-grid solar plants in the Russian Far East, the country’s easternmost region with limited access to electricity and transmission networks. The region, which is the largest and the least populated district of Russia, has the poorest energy and transport infrastructure of the country. In order to improve its infrastructure, the Russian government is seeking to attract investors primarily from the countries of the Asia-Pacific region.